December 03, 2016
I'm not a stranger to playing the maid. For many years, I have played a Civil War era maid and a late 1880/90s maid in a beautiful historical house. In fact, it just so happens to be the same house where my great grandmother was employed to come and clean on occasion in the mid 20th century (my grandpa doesn't quite remember when or how long his mum worked there exactly. . . he thinks maybe the 30s and 40s). Regardless, I have had an interest in maid uniforms and their general attire.  First, how about a brief history of the uniform of the maid starting in the early Victorian Period?
In the early and mid Victorian period, maid's uniforms were not elaborate affairs and there was actually not set uniform either. During this period, maids or servants dressed in plain, regular clothes. Often these garments were hand- me- downs from their female employer. Did maids wear hoops in this period? Yes, contrary to popular belief, maids during the 1860s did wear hoops. Did they always were caps? Again, contrary to popular belief, many maids did not wear caps. Some did for sure but it was not a regulation to wear one. Some maids even more silk dresses depending on their primary occupation and the discretion of their employer. It was not until the late Victorian period where maid's uniforms started to become somewhat regulated.


By the late Victorian period and the turn of the century, the all black maid's uniform with white accessories was introduced in England. This look is possibly  the most iconic of all maid's uniforms but did they wear this look all the time? Possibly not. Some suggest that a plain day dress in cotton or wool was worn instead with an apron. For the evening, the all black look with white. By this time, the wearing of a cap was starting to become a norm and many maids did not adapt more fashionable looks either, a break from the maids looks from the early/ mid Victorian look. During the 1860s for example, the hoop was a fashionable item and maids would wear them . .Later in the period, this would not be allowed for the most part.
By this time, the cap that symbolized the maid's look was customary and although useless, it served as a symbol of the maid. What was this cap? This cap was exceptionally simple being a band decorated with a ruffle of cotton (or possible linen). These caps could be plain or elaborate depending on the employer, her occupation, or her economic means too. Sometimes, the maid was required to supply her own uniform.

By the 20s, 30s, and 40s, the all black maid's uniform was still around but with some variation such as having a blue, grey, or neutral colored uniform instead or else in addition to the all black look. These looks were, like the ones before them, simple and serviceable. It should be mentioned too that although maids had their own uniforms and looks by now, their looks as a whole still mimicked the typical styles of the period which can be seen the above examples already given and in the 1920s example just below. These uniforms have that classic 20s look with the dropped waist but maintain the cap and apron, truly pushing this into a maid's uniform. 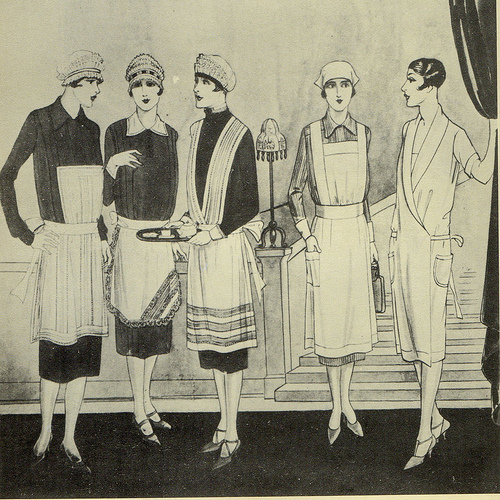 Below, an example of a servant/ maid's uniform from the 1939 Der Golden Schnitt book. It is a simple dress with and apron that buttons to the dress body. The simple cap can be seen quite well here too. What I find to be most interesting about this uniform and all of the maid's uniforms from the 20th century is how elaborate the aprons and caps are. Although these are primarily utility items, I would argue that by this time period, they have shifted to more symbolic items first, then practical items second. I would argue that because by this time, social status was increasing in its importance where people, especially in the upper crust, wanted to make visually certain that it was them on top o the social ladder. 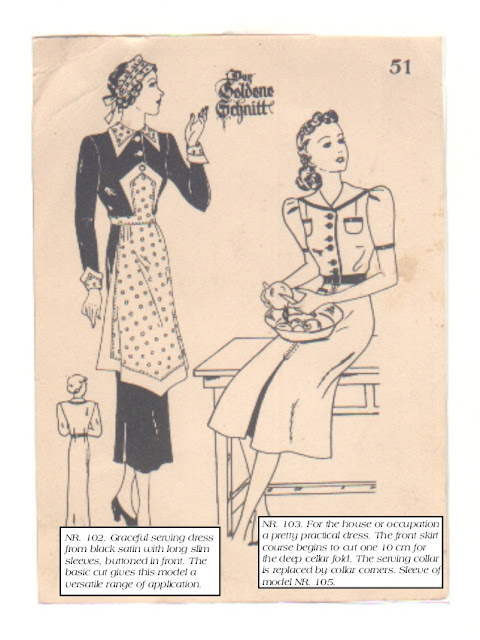 Some original Maid's uniforms and Accessories  from the 1930s and 1940s:

Further Reading and More:﻿
"Being in Service in Victorian England" from Blog of an Art Admirer
"Maid's Uniforms" from Witness 2 Fashion
1860s 1930s Maid Uniforms research 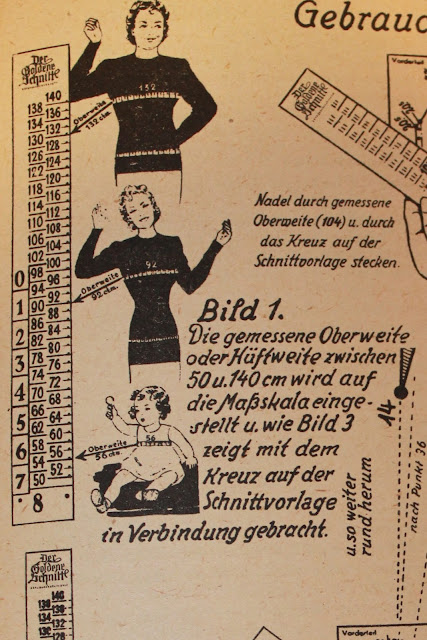 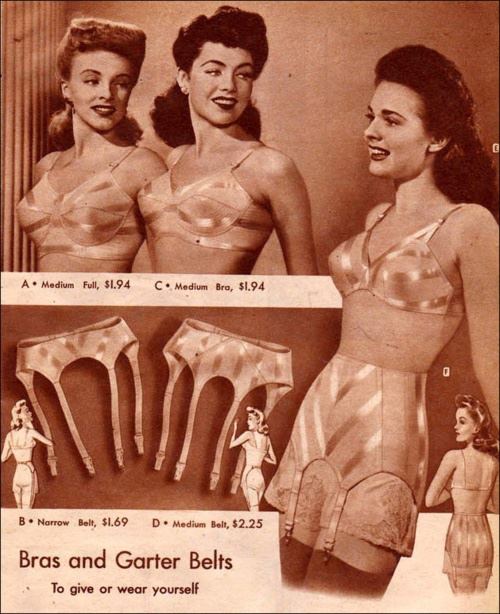 When I approached this topic, some basic questions that came to my mind were what colors did they come in, what materials, shapes, and how did they fit? With these, I pursued one of my favorite resources to satisfy the more antiquarian aspect of this topic: advertisements! One basic question that came to be was what was the difference between a girdle and a garter belt? Based on the research that I did, from what I can gather, the biggest difference between a garter belt and girdle is that a garter belt uses less material and does less to really shape and morph the body. A girdle, I determined, really helped to shape the body to make it more confined and controlled. Compared with undergarments form pervious decades and centuries, these items were liberating for women and much less restrictive. These items actually allowed a women to move and breath easy. These items were also worn against the skin and not over tap pants like shown in the ads for garter belts. I think the